Together with Zefiro Torna I worked on the soundtrack for B.I.G, a theatre performance ( 14+ ) by Ultima Thule. 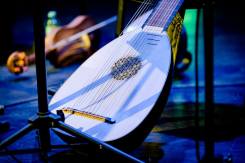 In the new performance they take a closer look at the theme of ‘growth’. This theme does not only stand for becoming, a personal outbreak or outgrowth of a certain biotope.
The theme is also metaphorically translated :  B.I.G. refers to stories from Ovid’s Metamorphoses. To Dafne, the nymph that breaks out of her own body. Or the overconfident Phaeton, son of the sun god, who hopelessly crashes in all his overconfidence. Musically baroque arias from operas or tragedies of Gagliano, Handel and Lully form a starting point for the creation of an elongated, driving soundtrack.