A very first ( and very amusing ) review of the new album Hokus Fokus by A Closer Listen. 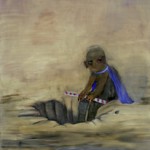 ” Forget dragons, locusts and blood, the apocalypse has officially arrived :
this is going to be one of the most original and oddly ( make that very oddly ) experimental albums of the year. This is the sort of album that spoils us for other albums, because we know that after we listen, we’re going to have to return to a less creative world.
How did Alice feel when she returned from Wonderland? Or the children who crawled through the cupboard?
(…) Bosteels wants us to do a jig, walk a tightrope, hop a train. The world is bigger, more mysterious, and more fun than what we know.(…) The caped creature on the cover knows he’s a superhero, and perhaps that’s why he’s grinning. ” ( Richard Allen / A Closer Listen )